It’s 1998 and I’m writing Trotting Krips reviews. There are some text adventures I am in love with that I never finish because finishing means I can’t ever play them again. The Pawn is one of them.

I bought my copy through a mail order circular. It offered The Pawn, Guild of Thieves, and Knight Orc for a total of $15. At low amounts of money, inflation comparisons sort of break down. It isn’t much now for three new games and it wasn’t much then. There’s so much I don’t remember regarding a document — the flyer — that was one of the most important pieces of paper in my life. While I do have some old price sheets for computer games in the mid-80s, I don’t have that one. Regardless, the games arrived and they worked on our computer, which had to have been an XT with EGA graphics. The Pawn was always thought, in my household, to be the “leader” of new age IF, what with its parser that understood complicated sentences and its opening title screen, still possibly the greatest opening title screen of its kind.

It’s now 20 years later since Bryan, Ben, and I started the Trotting Krips site. I didn’t feel I would ever have the time and the chops to correctly solve The Pawn without a walkthrough. I grabbed a few of them and had those up in a Firefox browser. I installed the Magnetic interpreter on my Ubuntu machine. I raised the scaling of the graphics by three times and started the game. 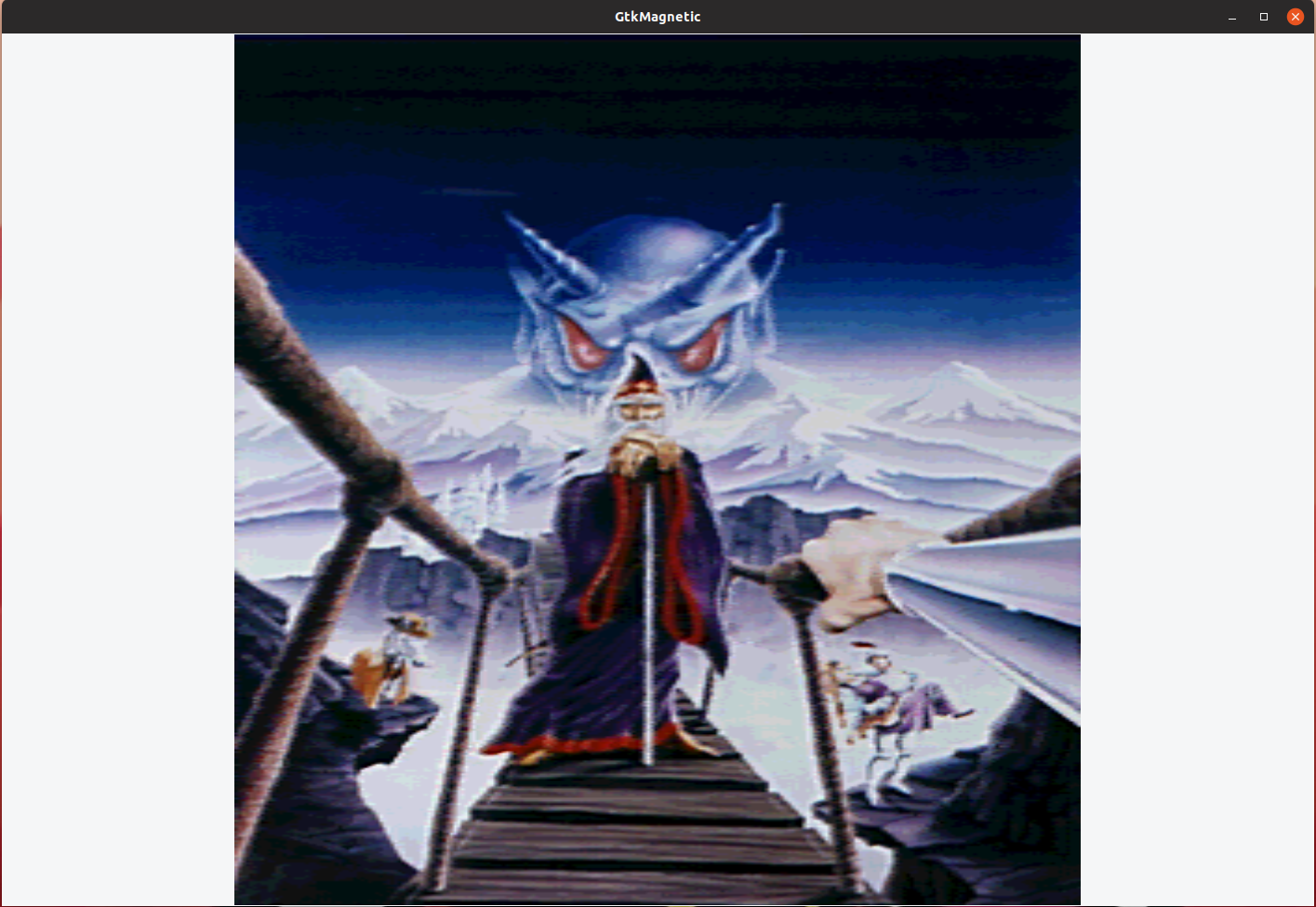 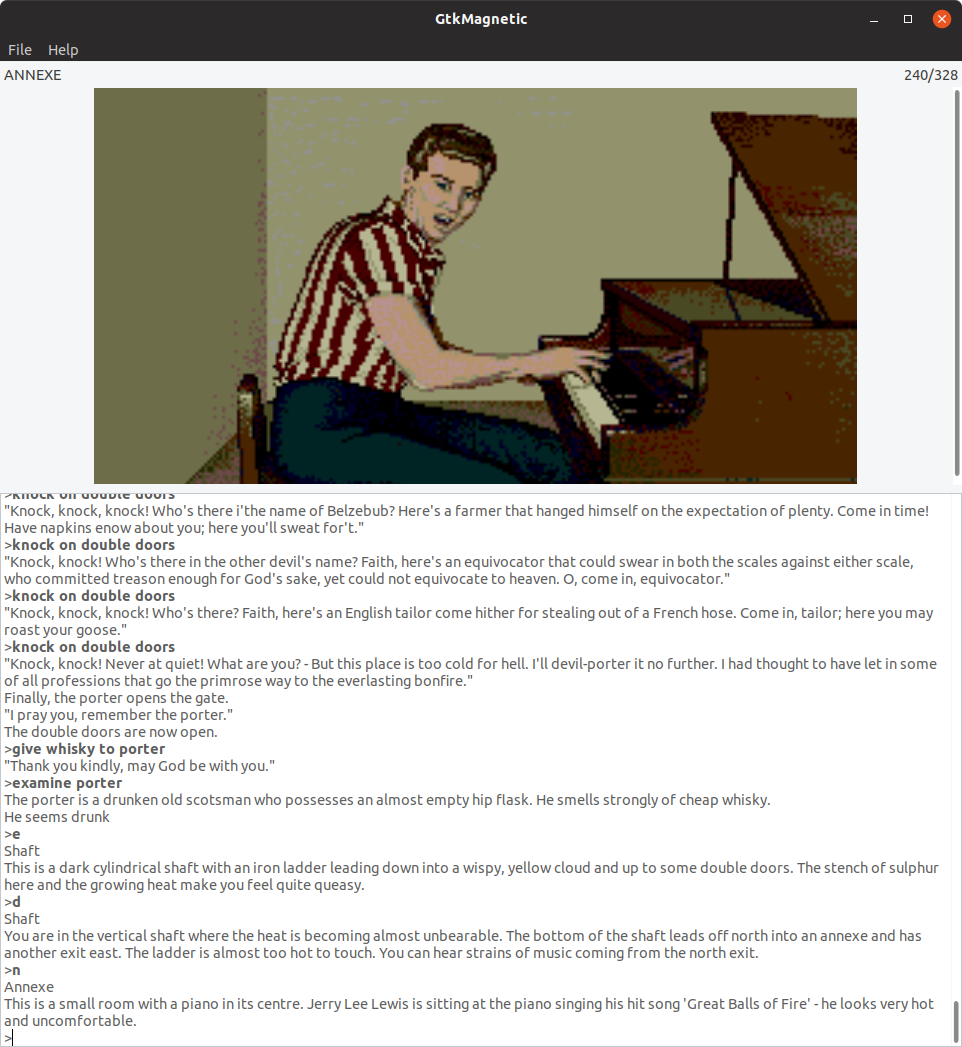 I don’t get parody that goes beyond a few minutes. You can spend all that time sending something up, but if you spend just a little more time you can have your own thing. And it’s too bad that The Pawn, which had the promise of something that fundamentally changed my life, is designed in such an awful way. There are good things in this game. Even if they wanted it to just be their Zork – a really good text adventure that did lazy fantasy – they had something to work with. You’re a nameless adventurer, sure, but you have a silver wristband on your arm that you want to remove. This is a great premise for a game where there are a lot of FedEx quests because various characters can then ask you to do things. And if you can forget about the mid-game, the end-game to The Pawn (serious spoilers starting now) has a ton of potential – you are doing the bidding of the nasty wizard Kronos. You encounter the Devil. The Devil asks you to use a potion to destroy Kronos and then bring him his soul. You meet up with Kronos and take him by surprise and suck up his soul. You return to the Devil and he melts away your wristband and dismisses you with contempt. That’s not the greatest adventure ever set to text, but it’s something. 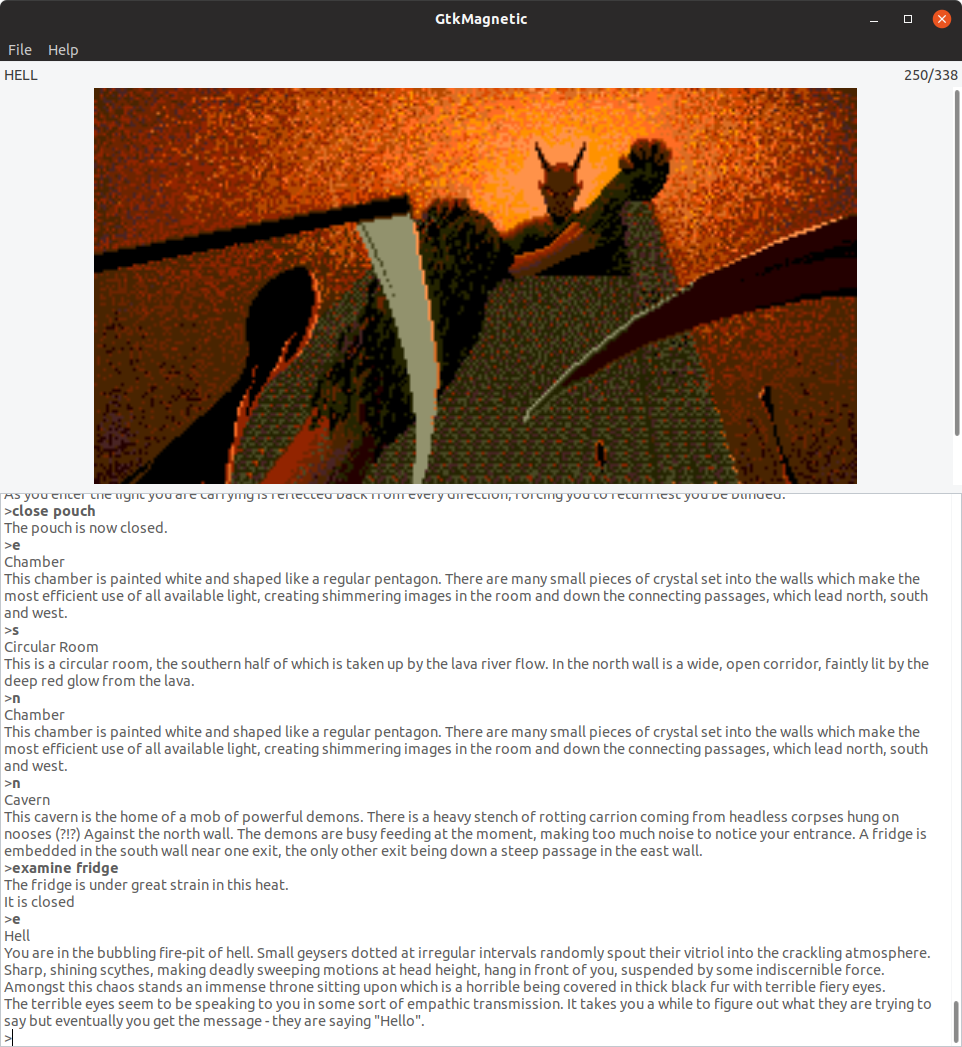 (The picture above is one of the greatest still images in the history of computer games. It was used in the promotion of the game and it’s easy to see why. Beautifully composed, a gorgeous palette that took full advantage of the 16 shades of red and black they had available, it really does set a mood.)

But in the middle of that are some really poor scenes. There is a dragon guarding a horde. And a picture of the dragon, high up on the gold horde. The way you get past the dragon is to examine the shadows (that admittedly are mentioned) and figure out that there are hobbits in the shadows. You have to >point at shapes in the game, though at no earlier section did you ever have to use that verb. And while I played on not the greatest monitor in the world, there isn’t a single hint in the graphic for this scene of any shapes. Not a one. (Or I’m blind. Camouflage absolutely works on me, which is why I almost hit a deer three times a week when I drive out of where I live and into work.) When you kill Kronos there is a platform you can get on if you are not carrying too much, but this is the sort of game where the trowel came in handy a zillion turns after using it twice – the hell would you drop anything? You can sneak past the dragon if you are wearing Kronos’s cloak and pointy hat … once. If you try it a second time, the dragon kills you. Keeping in mind that this is where Kronos chose to live, I guess. 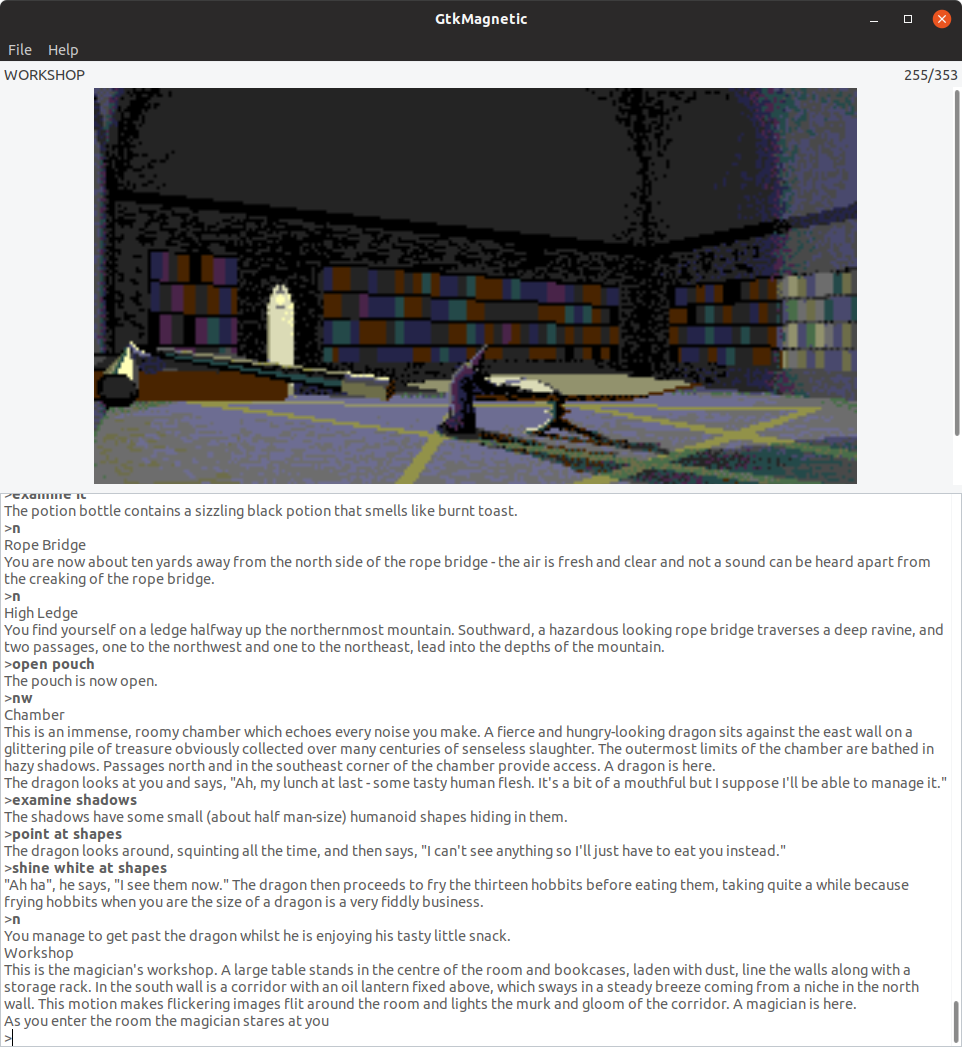 There’s one scene I almost liked – you meet a character named Honest John early on, who will sell some items if given a coin or coins. You finally get a coin about three-quarters of the way through by searching a cushion. Okay, fine, not bad! That’s where coins go. But when you return to the area where Honest John is, he’s not mentioned in the game’s description. I am pretty sure I had verbosity on. So good luck if you didn’t map and write down the precise location of where he is. I mean, dude selling plot-necessary wares not making it to the room description – that was a bug in 1985 and it’s a bug now.

(Okay, there is one thing I liked that emerged – the trowel was very useful for things. This really is a story about a guy and his gardening equipment. If the original creators ever got together to make a sequel, I hope they announce it with just a black and white outline of a trowel and a date.)

I’ve read stories of members of Magnetic Scrolls sort of buffaloing the gaming press by showing some of the neat parser tricks during interviews. The Pawn can handle some stuff just fine, like stacking commands, but even consulting a walkthrough I screwed my head up at having to use the word “lever” as a verb because nothing else did. The game tries to get across concepts that are way too advanced for it. I suppose I can’t get too worked up about Magnetic Scrolls showing happy paths in their demonstrations, really – it’s what happens in demos. I remain baffled why so many sentences lack a period at the end. When I was a kid I thought it was a house style. As an older guy on the Internet, who has seen one moron after another on various forums fail to use any capitalization or punctuation, it just looks stupid. This was the game I looked up to, thinking that there was something wrong with my puzzle-solving skills, thinking it was okay to have a mish-mash of unrelated garbage in a game and not follow any sort of plot circle or proper design because, hey, The Pawn didn’t do any of that stuff.

I’ve had dreams of taking one game a week that I have not finished since the 80s and doing just this – refreshing my memory, liberally consulting a walkthrough, liberally allowing for design errors, and putting to rest these icons from my childhood. Every game is amazing when it’s an unimplemented design and every game that goes unplayed in my Steam library is an incredible multi-genre masterpiece until I see that it has 7 unskippable opening logo screens. The Pawn has been a small but constant companion for decades, now. I had the poster that came with the game hanging up in my college dorm room. When I worked at Xerox for my first IT job, I printed out the scene I in-lined above with the Devil on the luxury color laser printers I tested. I still have that picture around. I had picked up things over the years that gave me a heads-up that it would not be a good game, but at least now I know. And I don’t really hold it against it. Goodbye, Pawn. I wouldn’t be where I am today without you and for that you’ll always have a piece of my heart.