Borrowed Time starts with a frame-per-second animation of a guy breaking through the glass window on your door and then reaching around and turning the doorknob to let him in to presumably start smashing you next. On the PC, anyway! The PC version does this. The version I played for this review was the Amiga’s and the game’s introduction just shows a pretty sedate office without any violence whatsoever. I mean, I guess that was the biggest difference between the Amiga and the IBM PCjr: the Amiga’s most famous demo is a simple bouncing ball in a family-friendly box while the PCjr ran ads with an actor wearing the same mustache that killed six million souls in the Holocaust. But here we have the second biggest difference between the platforms in my opinion. The history of entertainment software for the IBM PC is that of a game having to try twice as hard because it looks four times as bad. 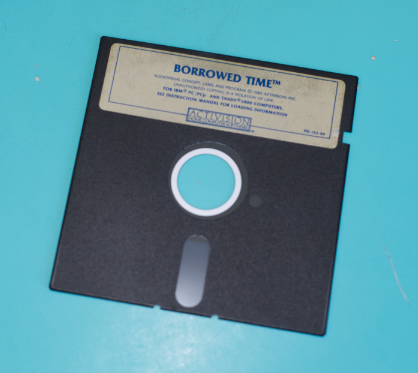 We had the real folio package of Borrowed Time in my family.  I’ve spilled a lot of ink on the Internet about software piracy but I don’t think we actually warezed that much software, all told. I didn’t have the kind of money to buy this when it was released, so I assume my father paid for it as he was the only one working in the family in 1986. A year after he bought this game for my brother and me to play he had a heart attack and I have no memory of the events before and after that, an absolute brain blackout for something that should have been firing off the thickest (?) synapses I had at the time. Every year we got from my dad after his heart attack was a bonus, we didn’t take any for granted after his bypass surgery.

So this was a replay of Borrowed Time because I had it as a kid and got pretty far but also a replay because I sure didn’t remember much beyond the opening. While (re) playing the opening, I kept coming back to the wonderful things this game does as a text adventure. One of the pitfalls of my own interactive fiction is that the “>talk” command starts solving all problems. It’s easy to get into a very small subset of commands which gets the player’s brain trained upon those commands and makes anything out of the ordinary a verb that must be guessed. Borrowed Time doesn’t do that – within the first ten minutes we have an >answer phone, a >read case files, a >hide (it took me a MONTH to implement hiding in Cryptozookeeper during the scene where the character Ben plays turns people into stone if he sees you to early, and this game just elegantly makes it the obvious command as shots start firing) a password you can sleuth out and then a wonderful scene where you get a slow motion play by play of the hired muscle (“Rocco”) emerging through a doorway where you can smash him in the head with a candlestick. We use the >hide command in the end game as well and I do like how it is implemented – you have the most obvious “hide” command at the beginning of the game (and you are specifying what to hide behind!) and in the end game you also need to hide behind something (trash in this instance) but it doesn’t come out of nowhere.

After this crazy opening, there is an entire little town to explore and that leads to the biggest misstep of Borrowed Time – it will kill you if it feels you aren’t making enough progress. It deserves to get dinged for this but the MiSTer and other Amiga emulators have you covered because saving to a slot on the ADF file itself works – this gives you a chance to save after the game’s opening and run around town to see what is going on and restore after this picture: 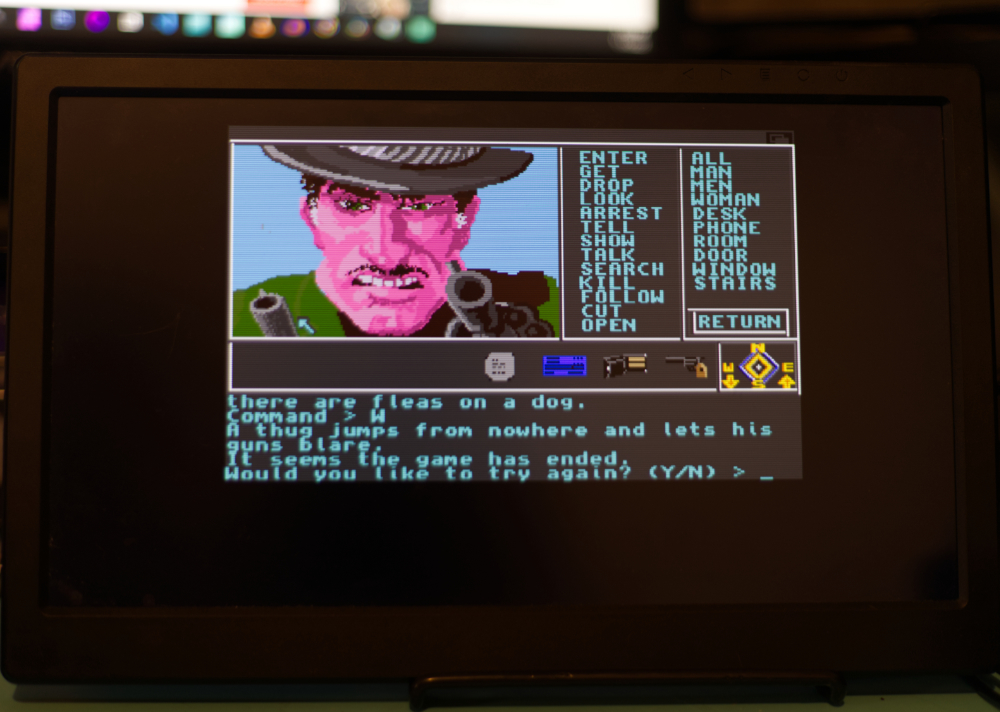 You have about 10 moves after the game tells you that “you hear a gun cocking somewhere” – in getting the screenshot up above, the thug shot me right outside a police station, which – hey, you’ve got to give a guy with skin pinker than Sinestro and the exact same mustache as Sinestro credit for having the balls to do his job even if the environmental conditions aren’t ideal. This is a man who does not subscribe to the 2022 mantra of “nobody wants to work.”

The mid-game has you finding evidence to put away the crooks in town that want to end you, Boss Farnham included, who seems to be the mastermind. There is a “give a dog a bone” puzzle, that old classic, and a better one where you have a confrontation with Boss Farnham and observe that he uses the word “Hiyo” to calm his ravenous Dobermans, which you can later use yourself to stop them from ripping your throat out.

The constant anxiety created by the daemon that kills you if you dawdle is there until the end game. I wish I could see the source code to see what’s going on. It’s tough because this is a game without much to say, but you still want to take time to look at objects and yet you do there is that sensation that the Murder Clock is ticking. Even when firmly into the game’s final puzzles – escaping the act of getting tied up, showing a bunch of evidence to the cops – you still get the listings that you feel watched and that death is coming.

There are some other problems that aren’t solved by modern technology as well. Whereas Infocom’s text adventures can show you more text on the screen this century, thanks to Frotz and other interpreters created well after the games were released, you get six lines at about 7 words each for the game’s text, so when a couple of things are happening at once, the economy of words it can present is pretty stifling. I don’t see anyone making a modern Interplay interpreter and even if someone did, the content from a writing standpoint just does not exist.

Is this worth playing in 2022? The inability to take your time and explore without reloading really distracts from what you can learn from this game. But! It has some really good bits if you’re looking to learn something about adventure game design. Borrowed Time puts on a masterclass in the opening and has enough interesting pieces throughout. It’s not really noir, although it uses a lot of the marginalia from noir –  everything does get wrapped up in a neat bow, there really isn’t a femme fatale of much note and there is absolutely no “voice” present from a hard-boiled private dick. For me, though, I am glad I spent a couple of weeks with it again. This is a game of place and time. This is a game that will always remind me of the neighborhood I grew up in. My brother and I were excited to have something like this to spend weeks on. The men who owned homes in the neighborhood I grew up in are all passing now, the husbands and fathers all dying as they hit age 77 and beyond. They lived life in a way I should probably try to emulate, while they were all PC gamers, they certainly didn’t spend evening after evening staring at a computer screen.  They all knew how to build houses (with what, their bare hands? >yes) and raise kids who had infinitely easier and better lives than they did, all while ensuring their wives and loved ones were financially taken care of when they started dying. This game makes you feel like you are never more than 5 moves away from getting gunned down and as I grow older I see the same thing pretty regularly in the generation that came before me. I’m trying to appreciate what I have around me as we crawl through the middle(?) of a deadly pandemic. But I’m gonna be honest. After the last couple of years it definitely feels like each day is just some Borrowed Time in real life too.